NEYLONS FACILITY MANAGEMENT HAS BEEN NAMED AS ONE OF EUROPE’S BEST IN FIRST EVER ‘ONES TO WATCH’ LIST.

Neylons Facility Management has been named as ‘One to Watch’ in Europe in a list of business excellence published by the European Business Awards, one of world’s largest and longest running business competitions.

Neylons Facility Management was chosen as it demonstrates exceptional achievement in one of the 18 European Business Awards’ categories and reflects the programme’s core values of innovation, success and ethics. Last year Neylons won the overall European Workplace and People Development Award. Look at the tour Sylvie Neylons did with the trophy to their Irish sites here.

The ‘Ones to Watch’ from across Europe can be found at www.businessawardseurope.com.

PUTTING PEOPLE AT THE HEART OF WHAT WE DO

What is core to Neylons are the people who deliver our services. Neylons promote from within and believe in giving everyone the opportunity to be the best they can be. The results: a culture of ownership, high achieving teams and motivated individuals. Putting people at the heart of what we do allows create leaders for the future of Neylons.

Adrian Tripp, CEO of the European Business Awards, said: “The companies chosen as ‘Ones to Watch’ are the most inspirational, successful and dynamic in Europe”

He continued: “The talent and tenacity at the heart of these businesses creates jobs and drives Europe’s prosperity. This ‘Ones to Watch’ list of excellence is a benchmark of success for the rest of the European business community.”

Companies on the ‘Ones to Watch’ list come from all sectors; from manufacturing to retail, agriculture to technology, and all sizes; from start-ups to billion euro businesses.

WHAT IS NEXT FOR NEYLONS?

Neylons Facility Management will now have the chance to compete in one of the 18 categories of this year’s European Business Awards to become a National Winner in their country. If successful, they will then take part in the Gala Final in December 2019, where the final 18 European winners will be announced. 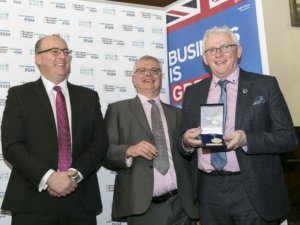